Don't Hide the TV Outside 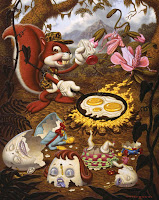 How does an atheist teach a kid about Easter? Simple. Hide the TV.
The functional elements of the Easter Tradition for American kids, the infamous Easter egg hunt, have their roots in the deepest recesses of the human psyche. The act of hiding eggs and finding eggs is a lesson in humanity, derived from hardwired hunt-and-gather instincts, that though largely symbolic in modern culture, evokes a formative experience in human development. The most basic requirement for the survival of any organism is the ability to find food. To do so requires luck, skill, and patience, with persistence and efficiency typically rewarded. Virtue itself precedes from these very fundamental adaptions in the human condition. Linguistically, the words themselves could just as predictably be found in reviews of epic English poetry or on the backs of block-busting Disney hard-covers. From virtue, they transcend archetypal components of cultural heroism into rational questions of character when exposed to their counterparts: fate, ineptitude, haste, apathy, and waste. The hunt itself can be elaborate or simple, but the object is the same. Go and Find. The evolutionary advantage of the habit is self-evident. Any organism which can seek out its own resources will naturally suffer if that ability is repressed or restricted.

The act of hiding something, however, is naturally a subordinate act, because it is by definition a second tier question. One may not stow what one has not obtained. Storage, as a concept, and as a fundamental way of life, is not novel to sedentary life; just as portability is not peculiar to tribalism and nomadic culture. As a matter of common sense, the sudden transition to an emphasis on storage heralded a hallmark moment in human history, accompanying the arrival of civilization and the origins of the concept of property and land ownership. The shift from hunting and gathering to agriculture and technology allowed humans to carve out places of their own, plant their flag, and solve their problems from the position of defense, as opposed to being always on the move for higher hills or more fertile valleys. With this sudden urge to settle came a new phenomenon: strange and mysterious neighbors. As proximity declined, questions of trust assumed the highest order of inquiry. The basic function of storing food, which was mostly a futile effort in the early days anyway, evolved a peculiar co-function, and as a subtle matter of context, the act of hiding was born. Humanity gained a completely new perspective on object permanence.

Both acts, hiding and seeking, are emblematic gestures from which a great wealth of observation can be derived by clever eyes and honest ears. Even dogs hide bones, but dogs don't build their homes on top of and/or within arm's reach of each other. Both of these efforts have a single common denominator, which is a firmly rooted concept of private property and inviolable space. Even in these more certain times, children are rarely encouraged to seek eggs beyond the perimeters of homesteads, school-yards, and park areas. These environmental states are associated neutrality and safety. They echo centuries worth of acculturating concepts such as boundary, trespass, invasion, and defend, while introducing new concepts such as expectation, cooperation, preparation and most of all, confidence. One can hide valuables in one's own home with the reasonable expectation of certainty that those items will remain in their places of storage and that no one else will invade their home and take those things. People send their children to school with the reasonable expectation that those children will be safe. People attend park areas with the reasonable expectation that those areas will be clean and safe as a product of social integration, not in spite of it.

Teaching a child to hide an egg is tantamount to asking the child to try to consider the innocuous world from an alien point of view, but to fail to teach that child how to hide, or at the very least properly store, food or valuables, is to inhibit that child's ability to sustain itself in maturity. Failing to teach a child how to find food, on the other hand, will inevitably increase its probability of starvation. Taken separately, each of the two acts could inspire volumes of consideration and exploration in the form of endless examples ranging from practical considerations of utility to philosophical contemplation of eternity. But when taken together, these two acts imply a cruel new lesson for humanity to learn along the way. Others come and take your things away.
The measure of a good hiding spot, as well as a good storage spot, for that matter, is how long valuables and/or food will remain unmolested by intruders and the elements. As such, the quality of a home, or even a neighborhood, is usually just a subjective measure of how confident a person is leaving the family jewels unattended.

Personal habits will reflect wide deviation within a diverse range of perceived security. Some people will build false walls for gun racks, others hide their money in banks. But mostly everyone in the present day tries to operate under the assumption that the food will be ok, so long as the power stays on. Six thousand years ago, the threat of having food stolen, as opposed to material items, would have been much more acute.

Though the medium has changed from vitals to visual aids, the knowledge of that core truth in human nature remains constant. Each generation first learns where to find food, and then, much more quickly, where to hide it, while learning in the process the more important revelation: Why.
The answer to why is the underwriting premise of civilization. Comfort, which all beings seek, is the perception of freedom from adversity, qualifying even if it is only the briefest of reprieves. Good neighbors won't rob or burgle. Good governments will defend the supply lines from foreign aggression. Good scientists and farmers will explore ways to increase production to meet demand. Good merchants will make the herculean effort to brave uncertain paths in search of trade opportunity. But good parents will teach the kids to mind the nooks and crannies, just in case. Because people will still come along and take the TV. In fact, the lesson isn't really fully complete until someone does. So give the kids a trial run! Hide the TV.

The sudden absence of the television is probably more intensely noticeable to a western child than the presence of an Easter basket. So imagine the child, groggy, rubbing his eyes on a Sunday morning, tiptoeing into the living room a few minutes before dawn, as of course they are prone to do, and suddenly discovering with shock and horror that someone has broken in in the night and taken Digimon away! Parents, play along! Now is the perfect time to force your materialistic kid to consider the world for what it is, and to reevaluate his or her understanding of security, of materialism, and of domestic trust. Teach them that the locks and bars aren't full proof alternatives to vigilance and consideration. Teach them that not everyone can be trusted. Remind them that it is decency in humans that provides the final necessary ingredient for complacency, but that such a dish sours and spoils quickly without refrigerators, carpenters, schools, and values.
If you're religious, its the perfect way to teach kids how the women must have felt to discover Jesus wasn't where they left him. When you have to explain why you won't call the authorities, just remember that the Romans were the ones who killed Jesus in the first place. And when your TV magically reappears after a few days, you're already off the hook anyway.

But if you're an atheist, its a totally safe way to broach a discussion with your kids about real human nature in an imperfect reality where complacency and comfort are often confused for one another. The upshot is you only have to do it once per kid, but just remember: Don't hide the TV outside.