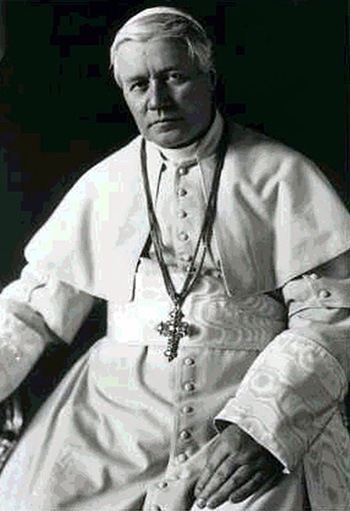 The air was still and quiet, and provoked a feeling of guilt and obligation. I wore my nerd armor, as much to counter this effect as to ward off assimilation. Alone, and early enough to wonder if I had read the schedule correctly, I sat quietly and unobtrusively, as seemed to be the custom. I hadn't sat in any church at all in perhaps a decade. Still I felt this pervasive sense that at St. Pius X, at 11:00 AM, on 26 January 2014, everyone one was going to notice me, and it was going to be awkward.

The faithful arrived in full force almost simultaneously.
They were visibly homogeneously Caucasian, which made me wonder how far many of them drove to get to my neighborhood. The proceeded mostly to their knees between the pews, which suddenly bulged with bowed heads, clasped hands, and closed eyes. I noted this as the preliminary prayer.

A crowd of nearly one hundred individuals became one organism as they rose to great the pastor, Reverend Kallookalam, and Indian fellow with a heavy accent, who wore long white robes draped in emerald green. He took center stage and directed the audience to a proximity greeting, wherein everyone turned briefly to everyone within arms reach for a handshake and a kind of buffet-style "hello," or "good morning."

Reggie Abrams carried the attending worshipers through the hymns with his deep, bellowing baritone, from stage right, and after a few of these, we were seated, whereupon all the children present were called dutifully to the front to be blessed, and sent on their way. After this, the audience rose again for more song and prayer, and then Reverend K. gathered himself before the pulpit for the sermon.

He spoke of the four men Jesus found after the imprisonment of john. In them, through them, and with them, Jesus proceeded to "cure every illness." Reverend K. interpreted this experience as a kind of general enlightenment for the people of the region at the time. To illustrate the backdrop for these events, he continued on, recalling the unique matrilineal heritage held in common by the twelve tribes of Israel. These were the twelve sons of four women: two wives, and the handmaiden of each. In this aphorism, the gentiles are granted access to the Abrahamic bloodline, and subsequently, the eternal covenant with God. These events lay the foundation for a messiah who would bring the message of God to all the world, Jews and Gentiles alike. It was his most cerebral sermon I had ever heard, but then, I was raised protestant.

Two odd points were worked rough-shod into this otherwise fluid soliloquy. The first was a vague reference to the origins in Karl Marx of the feminist movement, and Buddhism. The second portrayed the message of Jesus as one which demanded the service of men to democratic leaders. I mention this only because they were the only deviations from the basic sermon as described, but they didn't seem to have any contextual connection to the overall theme.

The gentleman closed by reminding us all that evangelize originally meant "to be a good angel," and the two of them led the audience in songs and prayer. After this, a robust and pink-skinned fellow with perfect white hair took stage-left, speaking briefly about local events and other minutia before conducting the offering. Men and women appeared from within the ranks of the faithful, holding out long-handled collection baskets and walking down all sides of both isles. To be perfectly fair to God, I had no money anyway, so I just sheepishly smiled and nodded like a Frenchman in a Chinese restaurant, as they made eye-contact and graciously moved on.
Finally, row by row, the pews emptied their contents into an orderly line, at the end of which, all were blessed by the man in Green and given to eat the flesh and drink the blood of the Son of God. All but me. "Are you Catholic?" he demanded gingerly, as Ben Kingsley might have, when my turn came. I had been compelled by the instinct of the collective to turn and face left, as those did around me. Pews aren't really conducive to passing each other discreetly, so I had just fallen in line, naively, but nonetheless obedient.

"Sort of..." I stammered. Certainly those behind me would be inconvenienced if I labored to explain that of all the Christian factions, this one seemed to have the most credibility in my opinion, or that I was, in fact, a registered Catholic on paper somewhere in the Bowels of St. Johns. "Sort of," was all I could muster before the clock ticked and the line moved again. He waved his hand in a kind-of good natured ampersand in front of me and told me to have a nice day, withholding both wafer and wine (the former less disappointing than the later), and off I went.

The rejection stung in a curious way. As the bastard son of a stripper, my own conception had been anything but Immaculate, and certainly not of any notable pedigree. I felt an old, familiar sense of antagonism re-surge, the one I felt in all of the protestant churches just the same, invoked by the peculiar paradox: a light for all the world, but somehow still not for the likes of an outsider like me.

The service had begun with a proximity greeting. It ended with an orderly exodus. I declined to join the luncheon, preferring the ten minute skate(my board was still in the same place I had left it, as I trusted it would be) down the highway to my own street, where I would spend the next few surreal hours coming down, and contemplating the intricacies and significance of dogmatic institutions.

Had I worn a proper shirt and taken the car, as my wife had pleaded (though she refused to attend either way), had I known the words to the things they chanted in unison, would the man still have seen me for what I really was? I felt that such a possibility bestowed a curious aura of xenophobia upon an institution predicated on the inclusion of the whole human race.
But then, thous shalt not give what is sacred to the dogs.