Legitimacy and Polity: The Bilderberg Group 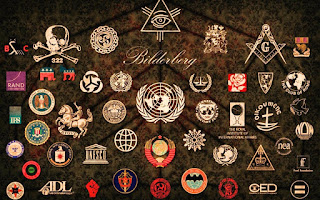 Welcome to the world's most high-profile low-profile global management social club! This prestigious and controversial conglomerate of investors and policy makers convenes in a different city every year. Attendance is invitation only, and the guest-list is a who's who of international (and multinational) executives from every sociological center. The annual guest list includes heads of state and/or their representatives, C.E.O.s, bankers and finance ministers, former generals and intelligence operatives, Ivy-League professors, top-tier media and news officials, economists...literally the global community's thin, golden, flaky upper-crust. As such, it is a Grand Council Assembly of polity, law, education, and economy (and one assumes at least a plurality of these attendants are in some way religious). But ironically, the single public face of this sprawling web of consolidated elitism is a minimalist website, www.bilderbergmeetings.org , which features no imagery or branding at all and very few words. Add to this absence of transparency the fact that the meetings and guest lists are announced only a few days in advance, journalists and reporters are not invited, and the governments of the host countries provide full security for this event, and the absurd claim that the organization itself and the meetings they conduct do not produce policies, and its easy to see how this has become one of the most controversial groups in human history.

In spite of the fervor it induces among the foil-capped talking heads, the organization really does maintain an incredibly low public profile. However, it has left an enormous media footprint. If you are unfamiliar, here are some biographical notes lifted directly from their site:

The group was founded in 1954 as "an annual forum for informal discussions, designed to foster dialogue between Europe and North America."

Abiding by the Chatham House Rule, "participants are...free to use the information received... but neither the identity nor the affiliation of the participants may be revealed."

The site claims that the group possesses "no detailed agenda," and conducts "no resolutions, no votes, and no policy statements."

Last June, the "64th" meeting occurred in Dresden, with "130 participants" from "twenty countries" discussing topics ranging from global and national politics to technology, energy, and economy.

They're real alright. and this time, the U.S. accounted for twenty nine participants, nearly a quarter of the total body (yes, I counted). Compare that number to France's eight, Great Britain's Six, and Spain's three. Among the American presence, were names like Evercore and Honeywell, which "middle class" consumers would recognize. But also present were reps from NBC, Harvard, the CIA, the US Army, ant the European Supreme Command. Senator Lindsey Graham attended, and someone from the Kissinger Association (since the old man can no longer come himself...) Others include Bloomberg, Alphabet, the Wall street Journal, and Peter Thiel. The international organizations present were, notably, the International Monetary Fund, the European Parliament, and the World Economic Forum. Among the more publicly oriented firms, Shell, BP, Exxon, and Alcoa (lightweight steel). A company called Titan Cement gets the honorable mention. (Word is, they bury the unruly journalists Jimmy Hoffa style.)

For this much concentrated clout, however, the group's front is as thin and un-alluring as a hyphen. The main page has four major heading: Home, Background, Meetings and FAQ. Of the four, the first two present about three hundred (vaguely redundant) words altogether. The meeting list is sufficiently enumerated, but the only substantive info comes from the FAQ section. Here, we learn that "convention costs are paid by members of the Steering Committee," (which itself only features thirty-two names) and that invitees are proposed by said members to the Chairman. Attendants pay their own travel and lodging. And in spite of the conspicuous absence of any poor or middle class people whatsoever, the organization asserts that these arrangements are intended to promote "maximum diversity in background, views, generations, and gender." Beyond this, the site itself offers very little substantive information at all. There are no other mission statements, no press council, no archives, and no other clues whatsoever about what really goes on at these meetings.

But before we get all Eyes Wide Shut about these folks, it may help to consider some external opinions and observations, albeit from widely divergent sources. From The Independent in the UK, we learn that "the area around the meeting is put into complete lock-down," and "national governments of host countries cooperate fully and provide public protection." (The Independent, 2015) Mother Jones quotes Rand Paul, when asked by an interviewer if he had heard of them, as saying "only what I've heard from Alex Jones." (Mother Jones, 2015) And this is kind of the problem. From here on out, the source train seems to degenerate into alarm-ism and popular intrigue from non-academic sources. In the same article, Mother Jones describes Alex Jones as claiming "that Bilderberg is a key part of a global plot to create a scientific dictatorship that will terminate the useless eaters."(Ibid)Whoa! Another devotee to this field is Tony Gosling, who apparently runs Bilderberg.org,which is a diffuse dump-style thread which alleges connections to "Neo-nazis," "censorship" and suppression of journalists, affiliations with "Drug-Money," and "Zionism." (Bilderberg) SourceWatch links the group to such American icons (to some audiences) as Daniel Ellsberg, the Rockefellers, the Rothschilds, and Henry Kissinger, and attributes the birth of the European Union to a meeting of this group in 1955. (Source Watch) Russia Today presents a list of known supporters of Hillary Clinton which includes David Cote, Eric Schmidt, and James Johnson. (Russia Today, 2016) Conversely, they mention only one supporter of Donald Drumpf: Peter Thiel.

So how do we classify this group? They are regulators who do not regulate. Chiefs who issue no decrees. Educators who do no informing. They're probably mostly religious (or believe me, the religious groups would have noticed by now) but they wield no kind of symbolic or coercive power. Something in the conspiracist's heart seems to assume some kind of underlying pattern of hidden kinship, as though global domination had been handed down from father to son (see the Schmidts and Altman's) since the Cold War began. One thing is for sure, the members themselves wield enormous power and influence, whether they do so in service of a secretive elitist organization or not. The group's website informs us that they used to issue public press releases, but as early as the late nineties, people just stopped showing up. It's funny how boring raw power can be to those who will never have it. Perhaps there is a sense of impotence involved, and a tendency toward skepticism concerning a topic that about which so many others are quick to hyperbolize and speculate. Some, like Mr. "useless eaters" Jones, for instance, have responded with a deep seated sense of social ownership, and their outrage bordering-on-paranoia reflects a much deeper trend away from the sense of legitimacy many of these related businesses and social institutions used to possess in the public eye. Also, even though the number seems small, 130 is just enough complexity to invalidate most knee-jerk criticisms of the general quality of the group's composition. It's hard to seriously suggest that all of the members and attendees are hell bent on global domination, but it is also very difficult to reconcile the essential premise behind the group's opacity: they claim that secrecy is the key to open dialogue, which turns the concept of a free press on its head, and also suggests that wherever careers and public constituencies are concerned, professionals are better off holding their tongues.

Such a position doesn't inspire confidence about how the world's best and brightest perceive the future.