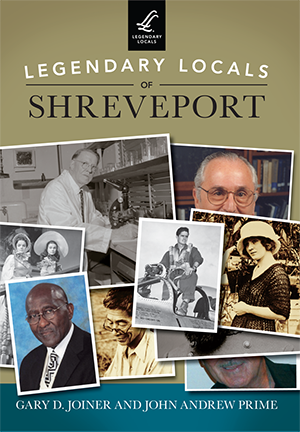 The most important criticism of Gary Joiner’s who’s-who of Shreveport history is that he isn’t in it. Joiner’s local street-cred as a man of letters is perhaps unmatched in the community. He has authored, co-authored, edited, introduced, collaborated, and consulted dozens of titles. His efforts to preserve and present the region’s cultural history are such that his own role in its development becomes inextricable from any study of the subject. Dr. Joiner has participated in legal contests and radio broadcasts and has aided and advanced the cause of thousands of students, researchers, and curious souls just trying to place themselves in the scheme of things. Gary Joiner is nearly ninety-seven years old and still lectures in the morning!

Legendary Locals of Shreveport is broken into five chapters, which cover much of the sociological spectrum. These include Arts and Entertainment, Business, Law and Politics, Military, and Saints and Sinners. Each chapter features a couple dozen or so full and half-page write ups, as well as an comprehensive, yet easily-accessible index. The book is a paperback, comparable in size and scope to a digest. It features plenty of black and white illustrations between the full-color binding, printed on mid-grade thick stock. For its size, it packs a punch. There are easily over a hundred personalities in this little volume. They are a testament to the many facets of Shreveport’s curious ability to produce a full spectrum of greatness, as well as a reminder of the community’s failures and struggles. The work possesses an inspiring quality when consumed a la binge, in just a few sittings; because of the brevity of detail in the treatment of each subject, it is easy to sweep far and wide across time and space in a short chapter, and also because of the stellar qualities which so many notable sons and daughters of the city exhibited.

One salient criticism of the work is the scarcity of color in among its biographical subjects. Shreveport is, and has long been, an integrated community. Whites and Blacks are represented in comparable numbers within the population as a whole. However, in Joiner’s first chapter on Arts and Entertainment, of the thirty two unique faces present, only five are persons of color, and one of those is incidental. Seven are women, and again, one of those is incidental. This could be the result of a lack of diversity within Joiner’s own pantheon of exposure, or the structural social barriers which engender such outcomes. This trend persists throughout the book, and the consequence is that the city’s most meaningful (and marketable) resource, which is its diversity, is missing from the overall work. Paul Money is an example of a contemporary black celebrity born in Shreveport. Overall, the writing is effective and accurate, all though it is a bit of a stretch to think of Terry Bradshaw as an entertainer, given those perhaps more credible examples which didn’t make it. Similarly, Shreveport is proud of Moonbot and Bill Joyce, but they aren’t exactly at the forefronts of their industries, at least not in the sense of Pixar and James Joyce, to give relative examples. George Carlin is easily the most interesting personality featured in the first chapter, and it would be interesting to get ahold of some of his work from his time at the radio station.

Like the first chapter, the second chapter, Business, is astonishingly devoid of color, in spite of not only the city’s rich heritage of industrious black men and women whose accomplishments were arguably much harder-fought due to the disadvantages of segregation and disenfranchisement. Pete Harris, a restaurant owner appears to occupy the only exception in Joiners survey of local movers and shakers, and he receives only a single paragraph, wherein his principle accomplishment was an establishment with genuinely influential patrons. The chapter also features grocers, oil men, literati, and the prostitute Anne McCune, who, like Pete Harris, also provided a venue for genuinely influential patrons.

The chapter on Law and Politics is also notable for a diversity deficit, but is perhaps less egregiously so due to its only treating less than a dozen subjects. Notable among these are C.C. Antoine and Johnnie Cochran. Antoine had the dubious distinction of being an African American holding high ranks in the Confederate Army, and similarly high civil offices in the postwar south, during and after reconstruction, when most black citizens enjoyed very few rights at all. Cochran’s career had little to do with, or impact on, the community at all. Other equally interesting figures of interest include Andrew Querbes, Charleston Lyons, and Robert Pugh. These are emblematic of Shreveport’s propensity to produce wealth and influence.

Joiner’s chapter on Military is completely and exclusively caucasian, without exception. By this point in the book, the trend is no longer credibly attributable to oversight. That two authors, esteemed and respected, and of immeasurable talent, managed to research, produce, and publish a historical work in, on, and of, the last standing capital of the Confederacy without a single mention of any black contribution or service (apart from Antoine, who is listed in the previous chapter) who is to the armed forces throughout the course of 170 years is an unbelievable proposition. It is not evidence of conscious bias, necessarily, but it is surely a glaring indication of an ethnocentric blindspot in the whole literary chain of command that produced this book, and one to which a debt of thoughtful reflection and self examination can only benefit the authors to remit.

The final chapter, on Saints and Sinners, is not thematically consistent with the rest of the book, and at first glance resembles a kind of catch-all for whomever Joiner and Prime had left over. But the chapter is a fitting and crucial component of the whole work as an examination of the town’s legacy. The reason for this is that so much of what made a name in places like Shreveport wasn’t a function of their material success as much as it was the moral content of their character. That is to say, if you got famous in Shreveport, it was at least as likely, if not more likely, that you did so for simply doing something incredibly benevolent or unbelievably horrible, as it was that you became famous for anything you actually built or accomplished. Dr. William Dalzell, who treated sufferers of the Yellow Fever epidemic o spite of great risk to his own life, and Fred Lockhart, who murdered at least one child and probably two other people (one of them for the murder of the other) are two perfect examples of this fascinating aspect of the local history.

It is fair to say that the last chapter of the book does not so blatantly follow the disappointing trend of exclusion from which the rest of the book suffers so acutely. And the work as a whole isn’t ruined by the observation. The many names and faces which are present deserve their places in history regardless of their demographics, and their accomplishments are as entertaining to study as they are enlightening to discover and inspiring to consider. Demanding that Joiner or any other professional follow some arbitrary quota is no satisfactory solution, and would only muddy the picture further because of the simple fact, with which no activist spirit could argue, that talent and grace and grit are not distributed according to race or creed. It is fair, however, to acknowledge what is missing and assert its value. Diversity is missing from the work, but it is also clear that with a but a little extra mindfulness and effort, such an outcome can be easily avoided in future works. Shreveport’s black, latino, and native communities have made innumerable contributions to the history of Shreveport, of Louisiana, of America, and of the species as a whole. However, these stories may be obscured and eclipsed by the weight and magnitude of the dominant culture. This does not mean they are less important or that they may be permitted to be left out. It means that it is all the more important that we seek them out deliberately and consciously, for they are most vulnerable to loss, and the most valuable to recall.

Be these things as they may, Legendary Locals of Shreveport is still a fantastic read for students and lay-readers of all persuasions. Highly Recommended!