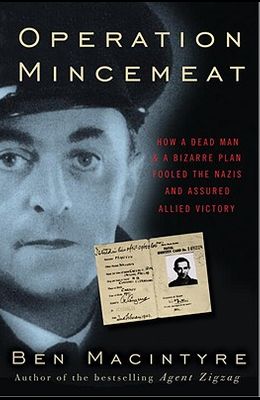 Nazis are dumb. Like flat-earthers, anti-vaxxers, and people who think chemtrails are a thing, there are just some people in this world who will stubbornly believe whatever they want to believe. Fortunately for the British, and for all of mankind, the Nazis proved just as gullible as pliable as any group of ethnic-supremacists hellbent on destroying and dominating the world order as any group that ever came before. Maybe the Nazis lost the war because German commanders were too scared of their petulant fuhrer to be honest with him when the chips were down. Maybe they lost because a virtually land-locked and blockaded nation full of fanatics couldn’t possibly defeat thirty million Russian soldiers while living on poverty rations. Or maybe, just maybe, they lost the war because of a handful of clever British spooks who realized early on that the biggest weakness in the Nazi regime was hubris and ego. That’s the premise of Ben MacIntyre’s Operation Mincemeat.

The Sunday Times called Mincemeat “Terrific...a rollicking read for all those who enjoy a spy story so fanciful that Ian Fleming...would never have dared to invent it.” Rollicking is right! This is the story of how Admiral John Godfrey, Director of Naval Intelligence, Charles Chalmondeley, intelligence officer, and LTCDR Ewen Montagu, representative of the Naval Committee on the infamous “Twenty Committee,” cooked up an elaborate scheme to dupe the German horde long enough for the Allies to secure a beachhead in Sicily, from which they would launch their final thrust into the Nazi flank on the European continent. If the operation failed, it is possible that the entire course of history might have gone differently. Where MacIntyre excels in this story is not only his painstaking eye for detail, but the sheer quantity of that detail that had to mined from classified sources, such that the book makes the reader feel like he or she is peeking behind a magnificent curtain, and becoming immersed in the very real world of intrigue and intelligence that other authors can only fictionalize. MacIntyre’s success is that he makes this world accessible to the general audience.

The book opens on an Andalusian beach in southwest Spain, in July of 1943. Fishermen are discovering a corpse, dressed as a British aviator, washed ashore by the morning tide. That man, depending on one’s security clearance, was either Bill Martin, a young officer with a pretty wife, who enjoyed nightclubs and the theater, and just so happened to be carrying some very sensitive documents that the British brass would soon be moving Heaven and earth to recover; or he was Glyndwr Micheal, a dirt-poor coal miner from Aberbargoed who had recently died of phosphorus poisoning and had never set foot in the armed services. The latter was a nobody, a shambling ghost from birth, destined for nothing short of obscurity, tragedy anthropomorphized in the flesh of a man condemned to anonymous toil. The former, on the other hand, just might have single-handedly won the global war against fascism, and more interestingly, never existed at all.

Flashback to a “tiny, tobacco-stained basement room beneath the Admiralty Building in Whitehall,” Room 13, which housed the men and women of Section 17M. It was here, as MacIntyre tells it, that Bill Martin was born. In 1939, Godfrey (and his assistant, the infamous spy-novelist extra-ordinaire, Ian Fleming himself) realized that the Germans might be baited, like trout, by a dead body containing sensitive information. They had gotten their hands on a corpse or two, and radio-traffic revealed a likelihood that the Nazis were prone to believing what they found. In 1942, Cholmondeley concocted Operation Trojan Horse, “a plan for introducing documents of a highly sensitive nature into the hands of the enemy.” And then Ewen Montagu (The “M,” in Section 17M) took it from there.

These three men, Godfrey, Chalmondeley, and Montagu, went on to fabricate an entire identity for Bill Martin, including carefully written letters from home, ticket stubs, and other bits one might expect to find in the pockets of an limey aviator. He needed a personality, an education, and hobbies. He needed a sexy picture of boo-back-home. Detail was the key to the success or failure of Martin’s only mission. Well, maybe not the only key. As Montagu and friends quickly discovered, Martin also needed a body. A body freshly dead of appropriately untraceable (or untraceable enough) causes. A body about the right age, and for whom there would be little familial opposition to posthumous conscription. And a coroner who would play ball…

Montagu would also need a real plan of delivery. After carefully weighing various scenarios of varying plausibility, Martin got his marching orders. He would be dressed in the uniform of a British officer, stuffed in a torpedo casing, snuck aboard the Seraph, a submarine commanded by Bill Jewel, toted off the coast of Huelva, and removed at the last minute from his custom-made bomb-coffin, at which point his personal effects would be stuffed in his pocket and his wrist lashed to a briefcase full of fake documents, and the whole package ceremoniously tossed into the sea, close enough for the currents to carry his carcass inland with the rising tide.

MacIntyre’s Operation Mincemeat is the story of a top-secret, covert, intelligence project, years in conception, months in development, and days in execution, in support of Operation Barclay. The overall goal of Barclay was “to convince the Axis powers that instead of attacking Sicily, in the middle of the Meditteranian, the Allies intended to invade Greece in the East, and the island of Sardinia, followed by Southern France in the west.” The Brits flooded the radio waves with peripheral references to the Balkans, and even went into the Balkans to begin hiring support personnel and other diversions, effectively leaving a haphazard trail of breadcrumbs to deceive the Nazis into believing what they would read in Martin’s papers, if everything else went right.

What makes MacIntyre’s telling of this crazy tale so compelling is the level of detail, in everything from character development to the execution of the plan, from the broad backdrop of war to the intimate details of what happened while the body was in Spanish custody, how they actually extracted and replaced the documents (and how the British forensics team could tell this had been done), to the actual German chain of custody of the documents, all the way to Hitler himself. Almost every character, like Martin, has a background, hobbies, an education, a career, a love interest, habits, and a personality. The conversations, the correspondence, and even the reactions of key players to the discovery of the body and its important secrets, it’s all here in this wonderful book. The photograph of Martin’s wife, “Pam,” for instance, was actually just a photo of Jean Leslie, a young girl who wound up working in the War Office, and who was a love interest of Montagu’s, who himself, of course, was actually already married. The British stashed a single eyelash in Martin’s papers, counting on the sloppy Spanish to miss it, and lose it, while removing and replacing the papers. And the German general, the one who secretly hated the Nazi regime, who may have known in his gut the documents were fake, but let them pass up the chain just to sabotage Hitler… There is so much detail in this book one can read it again and again and find something new each time.

For the academic types, the book is 400 pages, broken into twenty-four chapters, but it reads like a weekend thriller. It has extensive notes and a bibliography. There are illustrations throughout the book, to help the reader put faces to the names, and to show off the fake papers and other pocket-fillings as well. The jacket says MacIntyre was an associate editor of the Times of London, and the author of Agent Zigzag, The Man Who Would Be King, and others. In this reviewer’s opinion, MacIntyre earned his acclaim with this stranger-than-fiction history. It has spies, dead bodies, submarines, pretty girls, and enough lies to choke a politician! And when the Allied invasion of Sicily finally took place, that same hot July in ‘43, according to the author, out of 160,000 sets of boots to hit that beach, 153,000 survived, thanks to all those cleverly placed lies. Indeed, sometimes the pen is mightier than the sword. Operation Mincemeat proves that a little bit of imagination truly does go an awful long way!

This was a fun read, highly recommended for general audiences and scholars.