Stood Up by Jesus 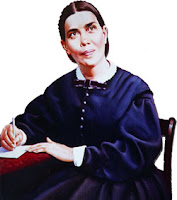 To understand Ellen White's Great Controversy concerning the Sabbath, it is necessary to first discuss the Day-Age Theory which inspired the Millerite movement, in which followers of William Miller assembled a series of scriptural passages which they maintained, when decoded, revealed what they believed would be the year of the rapture. White elaborates extensively on a careful examination of passages from Daniel, Ezra, and Mark with the assumption that the references to day, or days, should be translated as years instead, as extrapolated from associative references in Numbers and Ezekial, and set against a timeline of known biblical events. Drawing on Miller's equation of the word sanctuary with the earth and the word cleanse with the second coming of Christ, White demonstrates how the passage from Daniel could be interpreted to support Miller's famous claim that the world would end (or change profoundly) in 1844.

Daniel 8:14 was held by the Millerites to be a literal prophecy which claimed this cleansing or “purification by fire” would follow 2300 days (read years) from some point in history. White affixes this point to the year 457 BC, a speculative date presumed to correspond with the decree of Artaxerxes to “go forth and rebuild Jerusalem.” To reenforce this position, she continues to assert by reason of the declaration of an angel in Daniel that during the first seventy weeks or 490 years of this period, the Jews would be “cut off” from the divine covenant. She counts 483 years to the beginning of Jesus' ministry, in A.D. 27, and seven more until his death, during which he “confirmed his covenant for one week” which she and the Millerites held to be the last of the first seventy. With some simple math and a few intuitive leaps, she therefore soon arrives at a date for the difference...1844.

Here, White departs from Miller, and many disappointed Millerites, by rationalizing that even though Christ didn't seem to show up when expected, the “strength of the argument” was “not in the least affected.” With a flurry of obscure quotes from the New Testament she confidently vindicates the Millerite assumption on the wholly original premise that the date itself could be taken to mark a paradigm shift in Man's relationship with God, transitioning from “1800 years” of finding “access to God” through a “door of hope and reason” to a new age of salvation through the “intercession of Christ.”

White and the disaffected Millerites redeem themselves by thus standing on a completely unique new theological conclusion, from which she clearly and immediately distinguishes who is to be their galvanizing antagonist: the Papacy. Having provided a sufficiently convincing narrative, this was all that was needed to cement the movement in Protestant American culture. The Sabbath is used as an example of the papist “attempt to change the law” from the seventh day(now, literally just a day again, having been promoted and demoted again in less than half a century) to “the first instead” and is thus taken as evidence of the Church (both Catholic, by decree, and Protestant, by complicity) usurping divine law, and therefore treated as further validation of the aforementioned prophecy.

White does not directly equate skepticism or criticism of her highly inductive abilities with mandatory damnation, but she does draw a vivid picture of the potential consequences. Likening the Roman Catholic Church to the beast of Revelations, she sternly warns that the church, which “has not relinquished her claim to supremacy” has “rejected the bible Sabbath” and will unite “[with the] State to compel...all those who worship the beast and his image...to receive his mark.” It is upon the rejection of the “biblical Sabbath” that White hangs Catholics and Protestants alike. Yet, in spite of this oddly confrontational approach, the Seventh Day Adventist movement never-the-less found fertile ground in the Age of Reason, survived the Civil War, and grew a wide, eager following which would influence the twentieth century in many counter-intuitive, and arguably counter-productive ways. The easiest way to settle the dispute, from an employer's point of view, is to give both Saturday and Sunday off. Viola! The modern American weekend is born.


And now, Protestants and Catholics alike all thank God it's Friday.