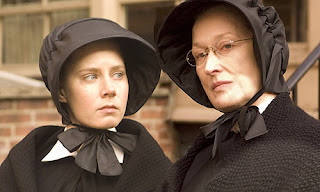 Three themes in the movie Doubt are the contradictory roles of faith in modern society, the embattled credibility of the Catholic Church, and the generational rift between staunch conservatism and rebellious liberalism. Sister Aloysius combines inconclusive rumors with a handful of loosely circumstantial evidence to conclude the worst about Father Flynn, and her assumptions of his character are reinforced by the generally accepted associations of the priesthood with pedophilia. As a result, she hangs all of her personal objections to Father Flynn's less-than-orthodox style upon a negative appraisal of his character, and her suspicion of him becomes her own unshakable gospel.
Religious faith requires a belief in the impossible, and therefore, the irrational.

Irrationality is loosely defined as the condition of not being rational, and rationalism, taken in the context of its counterpart, empiricism, is not a great word to use. Sister Aloysius is indeed quite rational in the inductive sense, meaning that she uses pieces of information to predict the whole. However, as is common with religious thought, she refuses to address the matter of truth directly, for fear of being wrong, or embarrassed, and is therefore unable to evolve. She becomes aware of a few details, like the alcohol on the boys breath, the time spent alone with Father Flynn in the rectory, and the reaction of another trouble making kid to Flynn's reproach, and forms an opinion of Flynn that has no functional basis in reality. She refuses to acknowledge any possible scenario or explanation once she has made her mind, and is willing to weigh her confidence against another man's entire life.

This whole dynamic is an indictment of religious thought. It is compelling because it is antithetical. Instead of believing in some altruistic fantasy of enlightened benevolence, the same kind of belief is presented in the context of a horrible crime, and the danger of such thinking is made more clearly visible. Without any actual evidence, Sister Aloysius condemns a man for a horrible crime and seeks her own action against him. But the audience must notice that her confidence is not enough to compel her to invoke actual law enforcement. The disgusting observation is that the false integrity of her church is of more value to her than the actual sin against the child. She is not willing to stake her own career on her faith when it actually matters. She will not make public her accusations against Flynn, and never attempts to sufficiently explain why. She is willing to believe this horrible thing, but deals with it from the shadows so she doesn't have to commit herself to the natural outcomes of her flawed way of thinking. She wants to play cat and mouse, because it “takes a cat to catch a rat.” On the other hand, it takes a special investigator and a district attorney to prosecute a pedophile, but these secular institutions are disregarded. The irony is that if Sister Aloysius is actually right about Father Flynn, then it is her own actions that saved the man from justice and arguably endangered other children as his career continues unchallenged in a new environment where he has even more access to young people. The glaring conclusion is that the church is not equipped to decide criminal matters any more effectively than existential matters, because it uses the same sort of stupid half-logic to confuse the one as it does to complicate the other.

This highlights the second major theme, that of credibility in the Catholic Church. Like Jesus, Flynn is attacked for the perceived errors of the church. It is not readily unbelievable to the characters involved that a priest would molest a child. In fact, it is more readily assumable that he would. Sister Aloysius almost immediately concludes that Flynn is guilty, and the basis of this assumption is the well-known history of abuse within the church, more-so than anything he himself is actually done. The Church that she has given her life to is of so ill repute that she essentially expects it to be true, because it is par for the course. In this context, she can validate her cloudy faith by voluntarily assuming the role of judge. She can embody the will of her God by declaring war on a perceived enemy. She can be the agent of her own salvation by purifying her church, her limited and antiquated sphere of influence, of Flynn's evil ways. It becomes necessary that Flynn is guilty so that her self-righteous crusade will have merit. In this sense, Flynn, whether guilty or otherwise, is just her straw man, to be incinerated for the reinforcement of her own twisted culture. If she loses, evil wins. If she wins, then her faith is quickened by success against a real enemy. God's hand would be clearly visible, and could be discerned indirectly by her deeds.

Ironically, nether thing happens. She succeeds in removing him from her church, but fails to raise the issue to public awareness, fails to prevent him from potentially abusing other children, and fails to bring him to justice for his alleged crime against the boy. She has actually succeeded in protecting Flynn and endangering more children. By using faith instead of reason, and by trying to play judge and jury on her own, she succeeds only in getting her own hands dirty, by assuming substantive responsibility, as she seems to realize toward the end, for his crimes instead of stopping him or helping the situation in any way. In this way, the author makes a pretty clear statement about why the church should not be trusted to handle its own legal matters in-house. Law requires the rational consideration of empirical evidence. For all her good intentions, Sister Aloysius proved herself to be completely incompetent, to the point of a handicapped child, when it came to evaluating a real problem in real life.

Much of Sister Aloysius' assessment of Flynn's character arises from a displacement of traditional values. Flynn doesn't trim his finger nails. He is friendly instead of monolithic and stern and unapproachable. His career seems to make too many transitions, implying rootlessness and he projects a kind of liberal attitude about the role of the church in society. In one scene, he throws open the window shades in a symbolic defiance to Aloysius’ insistence that they remain closed. This is evocative of John Paul II's historic assertion that the church needed to open their own windows and let the world see in. These elements are part and parcel of the effects of modernization and secularization on the church, which has undergone major changes in the last few centuries. Aloysius represents that rigid old guard, living a stoic life of self-deprivation, scaring the hell out of children, and living in fear of change, subsequently demonizing youthful inhibition as wildness needing to be tamed. Flynn represents the fresh air and friendly face the church needs to stay relevant. He is idealistic, young, and intelligent, and as such, is more dangerous to the established church than as an abuser of children, a liar, or even as a faithless fraud. He represents what she fears, in broad archetypal terms. And for that, if nothing else, he simply has to go, because if he stays, his charisma, his unique perspective, and his pragmatic tolerance will quickly consume the entire church.

This potentiality is evidenced by the ambiguity of the other main character in the story, the younger lady who first brings the matter of the boy's odd behavior to her superior's attention. She is simple, and provincial in a charming sort of way, but more importantly, as a function of her youth, she is impressionable, that is, she is a blank slate. In this, she represents the proverbial soul over which the two sides must fight. In her, the future of the church will be decided. Will she embrace Flynn's optimism, or will she learn Aloysius' callous rigidity. Her softness and bright-eyed enthusiasm imply an uphill battle, which is perhaps the real reason why Flynn must leave.

The hypocrisy of the Catholic Church is laid bare in this film. An organization founded on principle, ethic, courage, and decency will sooner cover up an actual sin than bring it to light. If Sister Aloysius had simply called the cops, a coherent investigation might have taken place. Flynn would have had to go on record one way or the other, and for god's sake, someone might have actually asked the boy what really happened. But in reality, as is so often the case with the clergy, the likely consequences of such a scandal outweigh the ethical need for justice. If the people in the city don't trust the congregation, or if the congregation is unable to rebuild that trust, then the business goes under. Integrity is subordinated to image. Ethics are only useful as an expedient. The church will lie to keep its perceived monopoly over truth, but it will fly that truth like a banner, as though such a thing ought to be as an inviolable foundation.

Signature performances by Hoffman and Streep. Great film! John Patrick Shanley will be remembered fondly among critics for this work.